Angie Abdou is an Associate Professor, English and Creative Writing in the Centre for Humanities.

Angie has six books: a short story collection, four novels, and a creative nonfiction book about youth sport culture (Home Ice: Reflections of a Reluctant Hockey Mom). She has also edited a collection of essays about Canadian Sport Literature (Writing the Body in Motion, AU Press 2018). Her main scholarly interest is Canadian Literature, particularly writing about the body, and she is a long-standing, active member of the International Sport Literature Association. She does a monthly Alberta book column on CBC’s Daybreak Alberta.

Before being appointed to the faculty of Athabasca University in 2015, Angie taught at the College of the Rockies in Cranbook for nearly fifteen years. She also did shorter teaching stints at the University of Western Ontario and Nipissing University.

Writing the Body in Motion: An A Critical Anthology on Canadian Sport Literature. Edmonton: AU Press, 2018

Anything Boys Can Do (a short-story collection).  Saskatoon: Thistledown Press, 2006

“From Anecdote to Art: the Saskatchewan Short Story as Archive of Prairie Life,” in Saskatchewan Literary History, edited by David Carpenter, 2018.

“The First (& Last) Time I Attempted to Stage an Intervention,” Elle Canada, September 2014.

“Teaching to the Precipice: Escorting Students to the Bleeding Edge of Their Genre.” Canadian Creative Writers and Writing Programs, Fredericton. June 2017. 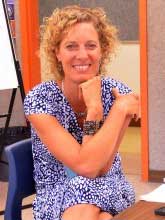